PALMDALE – Horizon Community Church in Palmdale was vandalized recently with an estimated $50,000 in damages to the floors, rugs, walls, and pews, authorities said.

According to church officials, on the morning of Friday, May 17, vandals broke into and messed up the church office, shattered the office window, and tried to break into the safe by digging out the dead bolt and tearing the door knob. Horizon Community Church members replaced the dead bolt and door knob that same day.

But this was not an isolated incident, according to the church’s pastor, K.C. Wahe.

Wahe said he received another phone call from a church member the following morning informing him that the church had been damaged again.

In the second break in, the vandals turned on the fire hose and placed it in the welcome center, flooding the majority of the church, including the sanctuary and office. The vandals went back to the safe and dug out the newly replaced dead bolt and door knob, church officials said.

The trespassers snatched important church documents and old photographs out of the safe, and then spread them across the wet floor. A church member had to pick up the documents, one-by-one, and try to peel them apart because they were soaked.

According to the Horizon Community Church, the suspects were not able to take any money, but only because the church does not leave money in the safe at night.

However, the church alarm was ripped off the wall, inappropriate pictures were left on the church computer, and video equipment and a guitar used for music on Sundays were stolen, according to the church.

The Sunday following the vandalism, the church had to celebrate Pentecost Sunday outdoors due to the damages in the church. Church members were disappointed and shocked by the vandalism, but they tried to move on, according to Pastor Wahe.

“We are grateful for the church building, but it’s the people of God that make up the church,” Wahe explained.

The community reached out to the local church, and neighbors came by and set up chairs for Sunday’s service. American Medical Response also donated water and brought an ambulance to the Sunday service because they heard that they were having church outside and they wanted to prevent the members from becoming dehydrated. Home Depot also offered support and let them know that they were there if they needed their help, church officials said.

Notes, phone calls, facebook messages, and emails have also been received by the church from community members. 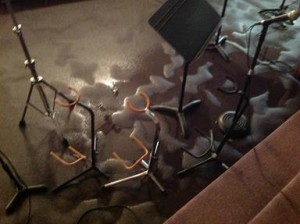 Horizon Community Church is currently in the process of recovering and is working with their insurance company. A carpet company has already come out to dry up all the water damage that occurred at the church.

Los Angeles County Supervisor Michael Antonovich has proposed a $10,000 reward for any information leading to the arrest and/or conviction of the persons responsible for the vandalism and burglary at the Horizon Community Church. The proposal is expected to be approved by the Board of Supervisors at their next Board meeting on Tuesday, May 28.

Anyone with information regarding this crime is urged to contact Detective Michael Luter at Palmdale Sheriff’s Station at 661-272-2472.