PALMDALE – Nearly 300 teachers and parents gathered for a protest at the Palmdale School District Tuesday afternoon. 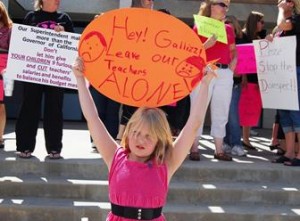 The latest protest, which was organized by the Palmdale Elementary Teachers Association, is one in a string of demonstrations to voice disapproval with what they say are unfair contract negotiations.

“The District would like for us to take a cut on our health care benefits, they would also like to have nine days of instruction cut off for the next two school years, they also want teachers to take a pay cut, and they want this to be ongoing… But teachers are standing up for themselves and not taking it anymore,” said Kathy Vanderzee, Lead Negotiator for the Palmdale Elementary Teachers Association. 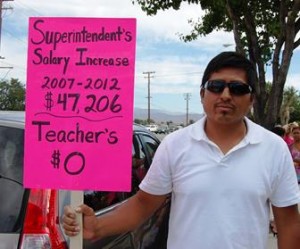 “We feel disrespected, we feel like there is no need for cuts, and I think that our superintendent keeps getting raises while he continues to want to cut our days and benefits and student time too,” said Leticia Merrill, Fifth Grade Teacher at Cimarron Elementary School.

“We have parents here that are donating extra things, they’re bringing in paper, they’re bringing in pencils, stuff that should be funded by the School District but it’s not because they say there’s not enough money,” Harris said. “I watch these teachers struggle every year and they haven’t had a pay raise in I don’t know how many years, whereas our superintendent, he gets a raise every year, so something has got to be done,” Harris continued.

During the protest, the group distributed a leaflet chronicling Palmdale School District Superintendent Roger Gallizzi’s compensation from 2007 to 2013.

A portion of the handout reads:

“Roger’s W2 form shows his taxable income from PSD in 2012 was $241,045.45. This does not include his health insurance or long term care dollars paid by the district.

Now think about what the board has been saying to teachers over this same time period and that we have had no raises (except health care increases) during this same time period. Roger has been given annual raises that amount to an increase of $66,045.45 more this year than he received in 2006. This is more than a 37% increased during the “Hard” years at the district. How can the board of trustees talk to the teachers about money problems and continue to give the superintendent additional dollars and benefits (not included in that percentage is additional sick days, the additional life insurance, the long term care premiums and the right to sell back vacation day[s] for cash ($801.31 per day).

These board members are not looking out for the students or the teachers; they are taking care of Superintendent Roger Gallizzi.”

Sitting in his office Tuesday afternoon, Gallizzi said he was well aware of the protest raging outside. 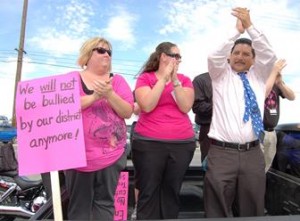 Gallizzi said the union has tried different tactics for several weeks to voice disapproval for the School District’s proposal, which would affect approximately 2,500 employees.

“Going to Board member’s properties, passing out leaflets, and now they’re doing this,” he said. “They’ve been packing the board meetings for the last couple of board meetings… and at some point along the way, they attack the superintendent, that’s what they usually do.”

Gallizzi said he had received raises over the years, but not in the last two years. 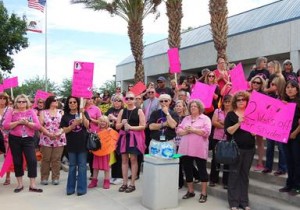 “Over the average amount of time I’ve been superintendent, they amount to about four percent per year,” Gallizzi said. “That’s not outrageous, but when you make a big salary, that adds up to be a lot of money.”

“And teachers, their salary creeps up every year as well, it usually creeps up more than four percent,” Gallizzi added.

Gallizzi said the District had run out of money and spent down its reserves, therefore the proposed cuts were necessary to move forward and reduce projected deficits for the upcoming school years.

For more information on the Palmdale Elementary Teachers Association and updates on the status of their negotiations with the Palmdale School District, visit their website at www.avpeta.org.