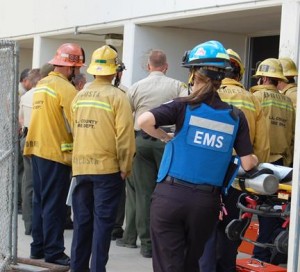 “The purpose of today is to train Antelope Valley Hospital staff and security on how to survive an incident if they were to have an active shooter in the hospital,” said Lancaster Community Relations deputy Michael Rust.

“We want to give our staff members the opportunity to experience this scenario so they can hopefully be better equipped if they were ever faced with this reality,” said hospital spokesperson Ellen Driscoll. 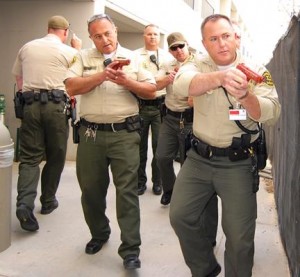 “We’re trying to make it as realistic as possible,” Rust said.

In both scenarios, a “gunman” gains entry into the hospital and begins shooting indiscriminately.

The emergency call comes into the Lancaster Sheriff’s Station and several deputies respond to neutralize the threat as hospital staff members take steps to survive the crisis. 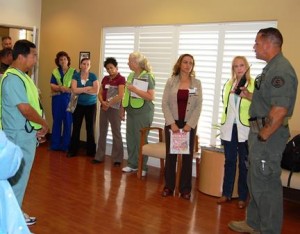 “Hospital security and staff have specific things that we’ve asked them to do to help them survive situations like this, but for obvious reasons, we’re not going to lay out how each entity is going to react,” Rust said.

“’Run, Hide, Fight’ is our theme,” said Timothy Lidberg, Director of Safety and Security for AVH. “If you have the opportunity to flee the area and not get shot, do it. If you can’t flee, then you hide, and you get in the best hiding position that you can. If those two aren’t options, then you grab something – a fire extinguisher, a chair, anything you can fight with – and try to survive.” 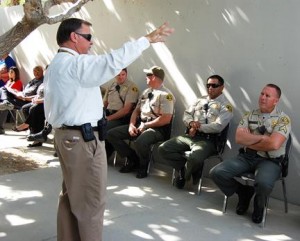 Different hospital departments participated in the active shooter drills at different points throughout the day, with hospital employees playing various roles in each drill, from shooting casualties to hostages. In the “Emergency Room” drill, employees wore blindfolds and the “gunman” shot blanks.

“We have observers involved in every scenario and they’re taking notes, so at the end of the day we can compile everything,” Driscoll said. “We have hospital safety officers in each department, and we will be sending that information to them so they can train the staff [members] who weren’t able to participate in this today.”

“It’s great that the hospital is taking a proactive approach to this,” Rust added. “When it comes to it actually happening, God forbid it ever would, they may react a little differently than total shock.”