LANCASTER – A Lancaster man was killed early Sunday morning after his car ran off the road and crashed into an electrical pole, authorities said.

The man has been identified as 36-year-old George Sandoval and he was driving a 2002 Jaguar, according to Ed Winters of the Los Angeles County Coroner’s office.

The fatal collision occurred around 1:35 a.m. Sunday (May 5) on Avenue I, near 35th Street East, according to Sgt. Turrill of the Lancaster Sheriff’s Station. 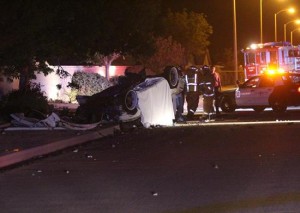 “The vehicle was traveling westbound on Avenue I when the driver lost control and hit a power pole,” Turrill said.

The car overturned onto its roof, pictures from the scene show.

Sandoval was pronounced dead at the scene, and a passenger in the vehicle sustained serious injuries, Turrill said.

The passenger, whose name was not released, was transported to Antelope Valley Hospital in critical condition.

The single-vehicle collision remains under investigation, and no further information was available Monday morning.