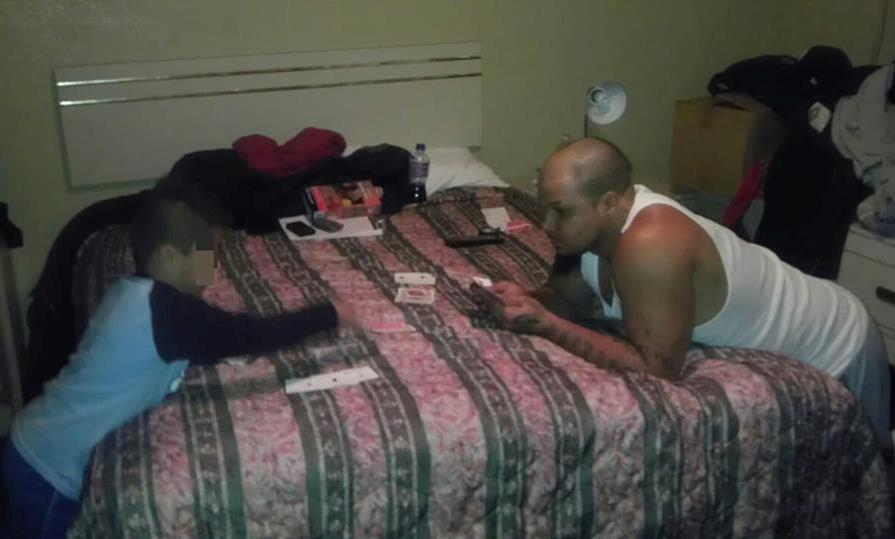 LANCASTER – The Facebook photo above shows a man and young boy playing cards on a bed in a hotel room.

The man in the photo is 34-year-old parolee Julius Jackson, a registered sex offender who is prohibited from having contact with children or from accessing social media, authorities said. The photo, which was uploaded to a Facebook account in Jackson’s name on Jan. 15, caused Jackson to be arrested Tuesday for parole violation.

“During the time [of the photo] he had only been out for less than a week, and he was not supposed to have any contact with children,” said Larry Dorsey, California State Adult Parole Operations Supervisor.

Jackson, who was released on parole on Jan. 10 for assault with a deadly weapon, is one of several local registered sex offenders keeping Facebook accounts in violation of their parole, Dorsey said.

“Parolees that have been convicted of sex crimes, the majority of them have conditions where they’re not supposed to have any access to social media websites or computers,” Dorsey said.

“The reason we’re doing this is mainly for public safety,” Dorsey said. “We want parents to be aware of social media. They definitely need to monitor how their kids are using social media, especially Facebook.”

A search of the residence also turned up a stolen motorcycle and carpet cleaner, Dorsey said, adding that agents realized the items were stolen after checking their serial numbers.

Jackson was arrested around 11:50 a.m. for violating parole and for felony vandalism, because he kicked out the back window of the patrol car, Dorsey said.

Jackson’s sister and brother-in-law were also arrested at the home for receiving stolen property, Dorsey said.

Agents planned to target six addresses during Tuesday’s compliance operation, but were only able to get to Jackson. They plan on conducting the remaining compliance checks this week, Dorsey said.

Editor’s Note: A previous version of the story contained a quote from Dorsey about the State paying for the hotel room shown in the top photo. While the State did pay for Jackson’s hotel rooms in the past (as recent as 2007), the State was not paying for his hotel room upon his release in January 2013.