PALMDALE – Sheriff’s deputies and the Special Enforcement Bureau spent several hours Sunday afternoon dealing with an assault with a deadly weapon suspect who barricaded himself inside a Palmdale apartment.

The standoff occurred in the 500 Block of East Avenue Q-12, and it stemmed from an assault that occurred on Saturday, according to Sgt. Paul Zarris of the Palmdale Sheriff’s Station. The suspect had reportedly punched another man several times before pointing a gun and threatening to kill him.

“The victim called up [Sunday, April 28] to report it and knew where the suspect lived,” Zarris said. “Deputies went over to the apartment, knocked on the door, and the suspect looked out the window and screamed and ran inside the apartment.”

Since a gun was allegedly used in Saturday’s assault, deputies did not make entry into the apartment, Zarris said.

Detectives wrote a warrant, and the sheriff’s department’s Special Enforcement Bureau was called in to coax the suspect out of the apartment, Zarris said.

“After several hours, a roommate that was also inside the apartment decided to come out,” Zarris said. “He came out on his own and we arrested him for delaying and obstructing us in our duties.”

The roommate, 32-year-old Alexander Waite, was arrested around 3 p.m.

About an hour later, deputies used tear gas to flush the assault suspect from the apartment. 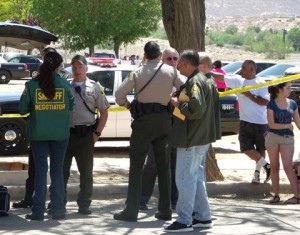 “The suspect came out immediately and gave up and he was arrested and then booked at Palmdale Station,” Zarris said.

His roommate, Alexander Waite, was booked on $10,000 bail Sunday evening, and then released from custody early Monday morning, after making bail.