For Gutierrez, and most all marathoners, the Boston Marathon is the pinnacle of marathons.

“Obviously, it’s a big deal. Everybody wants to run Boston. If you’re a marathoner you just want to be able to qualify for the Boston Marathon. When I qualified, I couldn’t be happier,” said Gutierrez.

The U.S. Air Force Test Pilot School Curriculum Standards deputy chief, and TPS graduate, qualified for the Boston Marathon in Indianapolis November 2011, where he ran the 26.22 mile race in 3 hours and 13 minutes. For Gutierrez’s age group, to qualify for the Boston Marathon, a runner must finish a sanctioned marathon within 3 hours and 15 minutes.

Gutierrez had been running marathons for the past seven years. He joked that it’s great because “you can eat anything.” 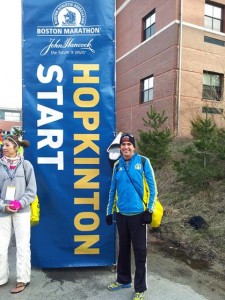 “Going to Boston was a great experience, my wife and I bought airline tickets nearly a year ago along with getting room reservations because it was a big event. Just being there was phenomenal, the excitement and energy were great.”

He said this year’s Boston Marathon was different because the standards to qualify were raised, which made it tougher to get in.

“Running the Boston Marathon itself, the course is phenomenal. It’s beautiful and you have just crowds of people left and right cheering you on. The weather was great at 45 degrees at the start. The event is well organized, and because it’s a qualifying event, everybody’s fast, everybody’s a marathoner. It’s a different crowd.”

Gutierrez finished the race in 3 hours and 38 minutes, admitting he sort of underestimated sections of the course called Newton Hills and “Heartbreak Hill.”

“The best part of the race is the last quarter mile when you turn onto Boylston Street and you can see the finish line. There are crowds on each side of the road cheering and yelling and you just take that moment in when you cross the finish line. At that point, the time didn’t matter, it was just about crossing that historic finish line.”

As great an accomplishment as completing the Boston Marathon is, Gutierrez didn’t have much time to celebrate. He and his wife had a plane to catch to come back to California and after about 20 minutes mingling around the finish area, they headed for the subway.

“We were about a block away behind Boylston St. headed towards the subway. My best guess is that the explosions happened right before we reached the subway. We didn’t hear the explosions. We were on the subway and that’s when we started getting all these messages asking, ‘Are you OK?'”

Gutierrez said he slowly started to hear about what happened and a friend texted him telling him about the explosions. He and his wife couldn’t send any responses by text or phone, but were able to use Twitter and Facebook to respond.

“It was not until we got to the airport when we saw images of what was happening. On TV we saw where the explosions happened. We were just there. It was like a bucket of cold water thrown over you. All the excitement just went away.” 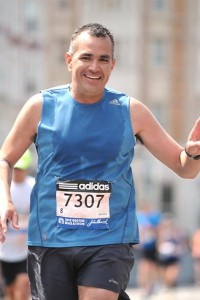 Gutierrez and his wife managed to stay ahead of the curve since they left the marathon right away and arrived at the airport before the subways were shut down and departed before any flights were grounded. He said he feels lucky finishing the race in the time he did.

“My wife gets a little emotional when she watches the news (about the bombings) because she was across the street close to where the second explosion happened. She met with a friend and their two daughters there. It was just lucky that I finished when I finished because sometimes when I run marathons I get leg cramps that force me to walk a lot during the last six miles. When that happens, my time is around the 4 hour/5 minute to 4 hour/10 minute timeframe. Luckily, that didn’t happen this time because that would have been me and my wife in that area. I got done with a decent time and it was just fast enough to get out of the area before everything happened.

“The saddest part for me was when I heard that an eight-year-old boy had died. During the entire marathon you have hundreds, if not thousands, of kids lining the sides of the road cheering you on. They stick out their hands and you slap their hands along the way and I like doing that. They get all excited by you just running by and slapping their hands. When I learned that one of them had died, that was the saddest point for me. The kids make the experience a whole lot better.”

As a marathoner, Gutierrez is certainly proud to have finished the Boston Marathon and now, unexpectedly, has been to an event that will be forever remembered throughout history.

“It certainly was bittersweet. Personally, I did it, I’m proud that I ran it, and now it’s part of history. It will always be a remembered Boston Marathon. I’m proud of making it there, but it will always be stained by that event; the sadness of three innocent lives lost and so many more injured who were there to support family members and runners. Although we don’t know those people personally, we are too familiar with the experience of being there either running or supporting your loved ones. We pray for them, they will always be in our thoughts.”